Deep-venous thrombosis, or DVT, is a blood clot that forms in the deep system of veins in your legs. It usually starts as a small clot behind one of the valves in the vein, and progresses to cause a blockage throughout the vein. Risk factors for developing DVT are prolonged sitting or lying flat, damage to lining of the vein (trauma) or abnormal blood clotting (hypercoaguable state). People at risk for DVT include people who are obese, pregnant women, women on estrogen pills, people with cancer, people with varicose veins, people confined to bed or a chair, and people who have had an injury to their legs. Patients complain of acute pain and swelling of their leg, which usually is only on one side. In severe cases, the leg can appear pale or blue.

Why is the treatment of DVT important?
A DVT can cause pain in the leg, but more importantly, the blood clot that forms in the leg can break off and become lodged in the blood vessels in the lung (pulmonary embolism), which can be life threatening. Also, if the swelling in the leg becomes severe, the blood supply to the leg can become compromised. 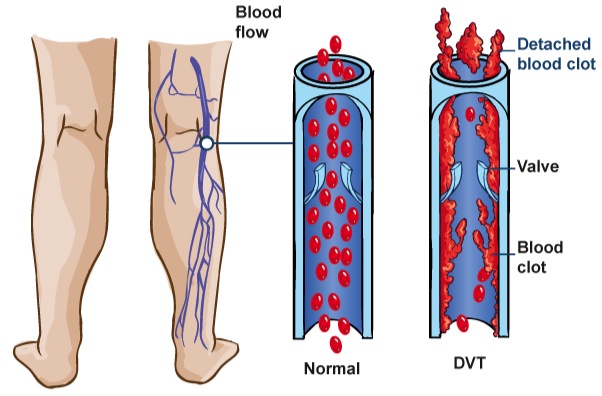 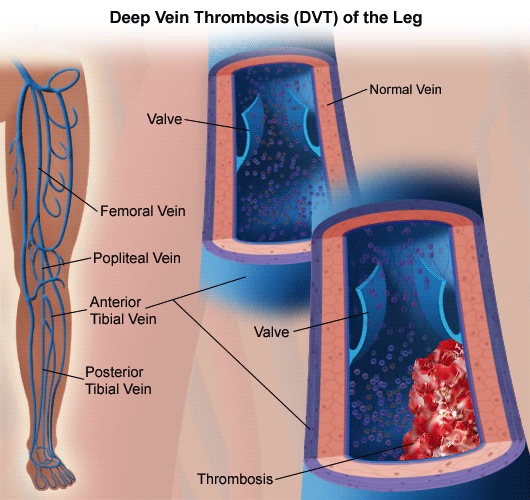 How can DVT be diagnosed?
A person who has the symptoms of DVT should see a doctor. Most doctors will look for blood clots deep in the legs with a simple blood test and/or an ultrasound test (venous duplex). A venogram (x-ray study with the injection of contrast into the vein) is rarely needed for the diagnosis of a DVT.

How is DVT treated?
DVT is treated with blood thinners. This usually does not require a patient to be admitted to the hospital. It can often be treated with injectable heparin at home. Later a pill is given for long-term blood thinning (Coumadin). Pregnant women cannot take Coumadin (it may cause birth defects) and must take injectable Heparin until they deliver.